close
About this project

These campaigns typically include political astroturfing, in which a seemingly grassroots movement is orchestrated from behind the scenes. These campaigns also typically include coordinated inauthentic behavior, in which social media accounts work together while disguising their identities or objectives. Selected cases do not include instances of political misinformation, in which evidence of coordination or intent is absent.

The Data Visualizer is intended to describe the targets, platforms, methods, origins, and intent of individual political disinformation campaigns. Its classification system mirrors the approach that DFRLab researchers use in evaluating new cases. This system consists of 74 binary variables, such as the technical methods or narrative techniques employed, and 24 text descriptors, such as concurrent events or the campaign’s inferred objective. The system offers a high degree of granularity and enables comparison of cases across disparate cultural and political contexts.

Each case is based on existing public documentation of a political disinformation campaign. This approach ensures that case selection is consistent and transparent. However, it will also result in a degree of overlap as more cases are added to the database.

The initial database consists of 60 cases. Each case has been independently coded by two researchers, with disagreements tracked and reconciled in a collaborative process. Initial cases are limited to studies previously published by the DFRLab.

Because less reporting is available on cases that target the Global South and because the total number of cases is potentially inexhaustible, the database should not be used to draw definitive judgments about the prevalence of disinformation in some nations over others.

You can view the detailed methodology, codebook, and whitepaper on DFRLab’s GitHub page, here.

Patriotic trolls or organic coordination in which disinformants seemingly operate under their real identities. A concentrated effort by one online group to manipulate another, e.g. through mass-commenting a certain message.

Inauthentic social media accounts used for the purpose of deception which evidence a high likelihood of human operation. This includes catfishing and other highly tailored operations conducted under inauthentic personas.

Inauthentic social media accounts used for the purpose of deception which evidence a high likelihood of automation. These accounts evidence no sustained human intervention beyond the effort necessary to program them initially. They often form large networks for the purpose of inauthentic amplification. This includes both fresh and repurposed accounts.

Undermining search engine optimization techniques with the intention of creating an inorganic correlation of search queries and results. Often realized by way of cooperative efforts by online communities. e.g. “Google Bombing.” May also include typosquatting with the intention to mislead or redirect to another URL.

Distributed denial-of-service. Malicious attempt to disrupt server traffic. In the context of political disinformation campaigns, this is intended to make it more difficult for the target to launch an effective counter-messaging effort.

The unauthorized movement of data. In the context of political disinformation campaigns, this is the acquisition of sensitive information through spearphishing or similar techniques that can be subsequently released by the disinformant to boost their messaging effort.

Any content that has been deceptively edited by use of Photoshop or similar software. This includes the deceptive co-option and re-use of extant media branding and style guides. This does not include the use of deep learning processes.

Confusion by way of discourse infiltration and targeted distraction. Conscious efforts by disinformants to derail political movements through tailored engagement.

Confusion by way of hashtag invasion and mass noise generation. The hijacking of an online political movement through appropriation of an existing hashtag and addition of large quantity of unrelated material.

The governing body and functions of a state, including national leaders, institutions, and departments and agencies that are non-military. For example, the Department of Homeland Security, the Supreme Court, or the FBI. Includes military-related bodies without the ability to defend or use force, like the Senate Armed Services Committee.

The part of government with the ability to use force. For example, the U.S. Secretary of Defense, the Department of Defense, or the Navy.

Organized competitors for political power who can obtain or wield power directly. Includes politicians currently in office. Can also be an individual working for a party.

Organized competitors for political power who can obtain or wield power, even if indirectly; not necessarily enfranchised. Non-state political actors are formally organized, coordinated, and cohesive. Examples include Greenpeace, ISIS, and the KKK.

Includes groups that contract out to the government, individuals looking for financial gain, and mercenaries.

Individuals who are influential but who do not belong to a ruling government coalition. Includes groups of individuals who are not formally organized but work together. Examples in this category can include journalists, former politicians, and a group of 4channers. For individuals who have their own foundations (and thus could be placed in Non-State Political Actor), coding depends on whether or not the disinformation is foremost targeting the individual or their foundation.

The enfranchised population in a specific country or within a demarcated boundary. 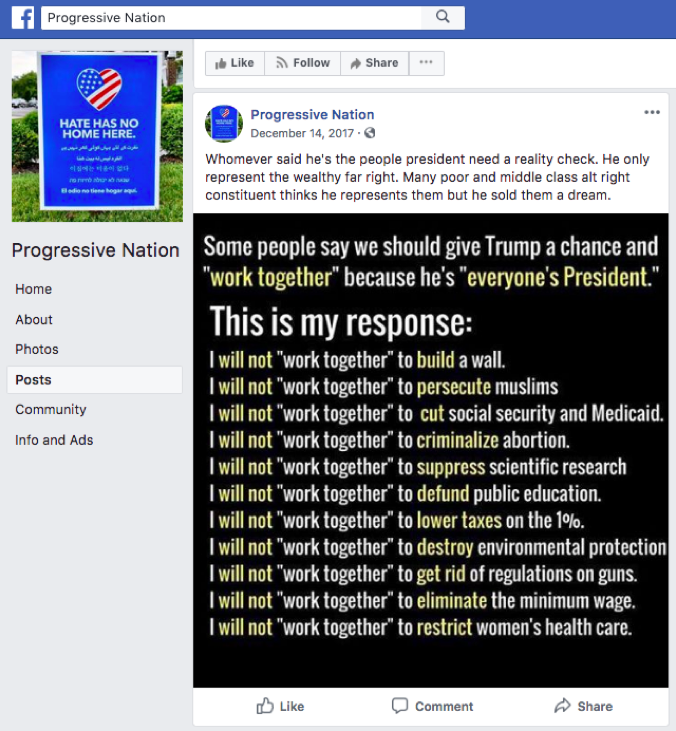 Middle East and North Africa (MENA), 2018 —Facebook pages created by a for-profit marketing firm in the United Arab Emirates were taken down for inauthentic behavior. The Facebook pages targeted Qatar and the Muslim Brotherhood while spreading misleading content. 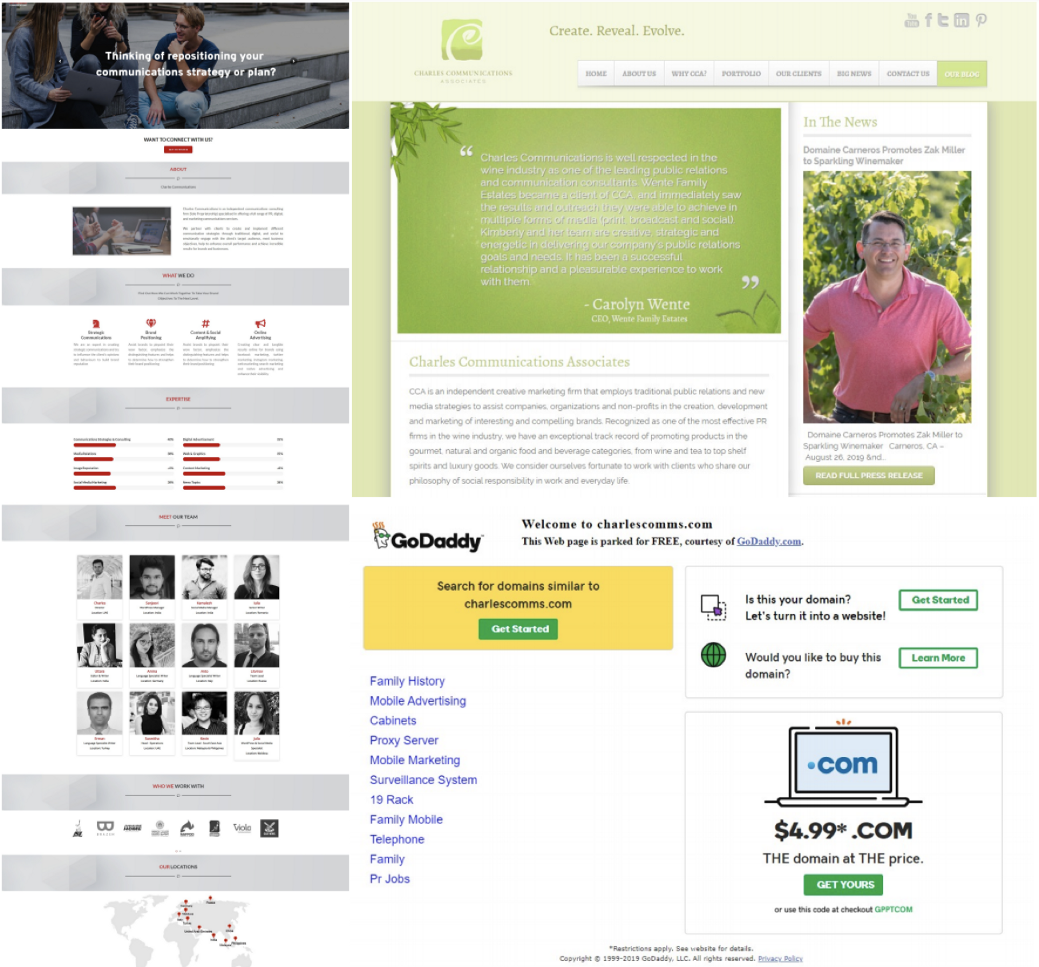 Puerto Rico, 2018 —A group of Puerto Rican officials, among them Governor Ricardo Rosselló, used a private Telegram chat group to discuss at least 12 specific actions that either boosted pro-government messages or targeted government opponents. Shortly after each initiative was discussed, a group of troll accounts mobilized to execute the inauthentic amplification on Twitter. 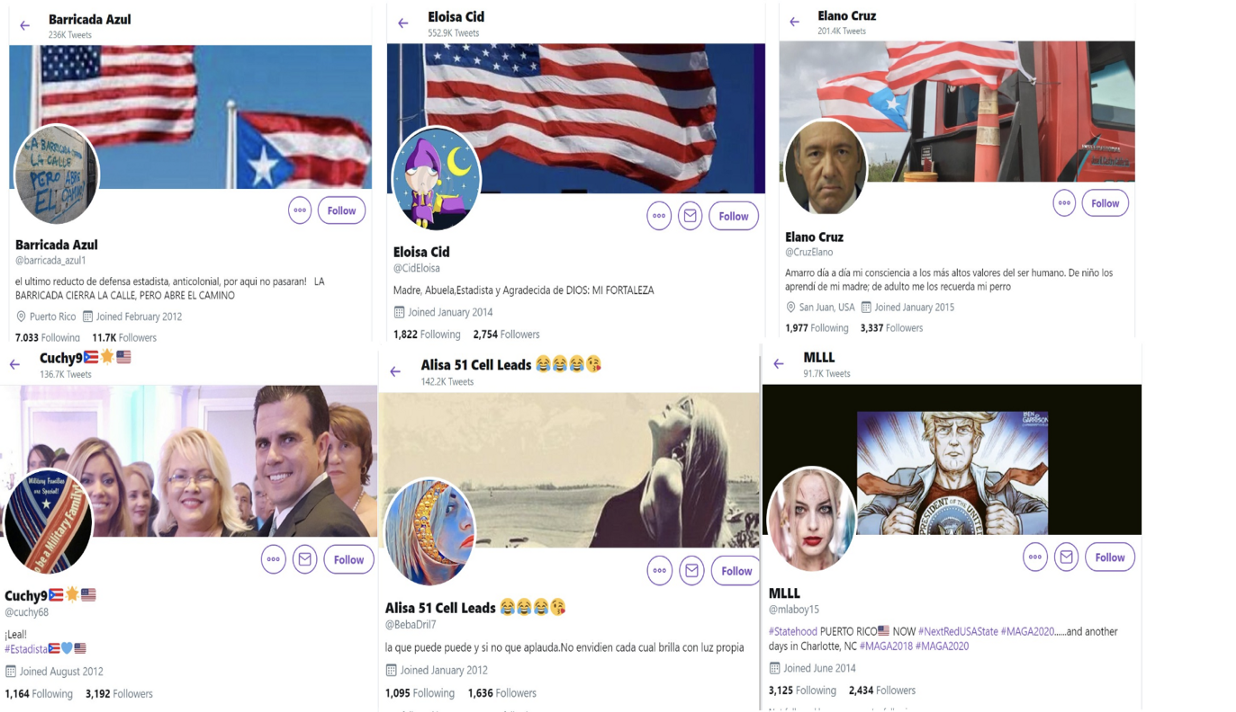 United States —Facebook removed 82 pages, accounts, and groups for coordinated inauthentic behavior that originated in Iran and targeted people in the United States and United Kingdom. 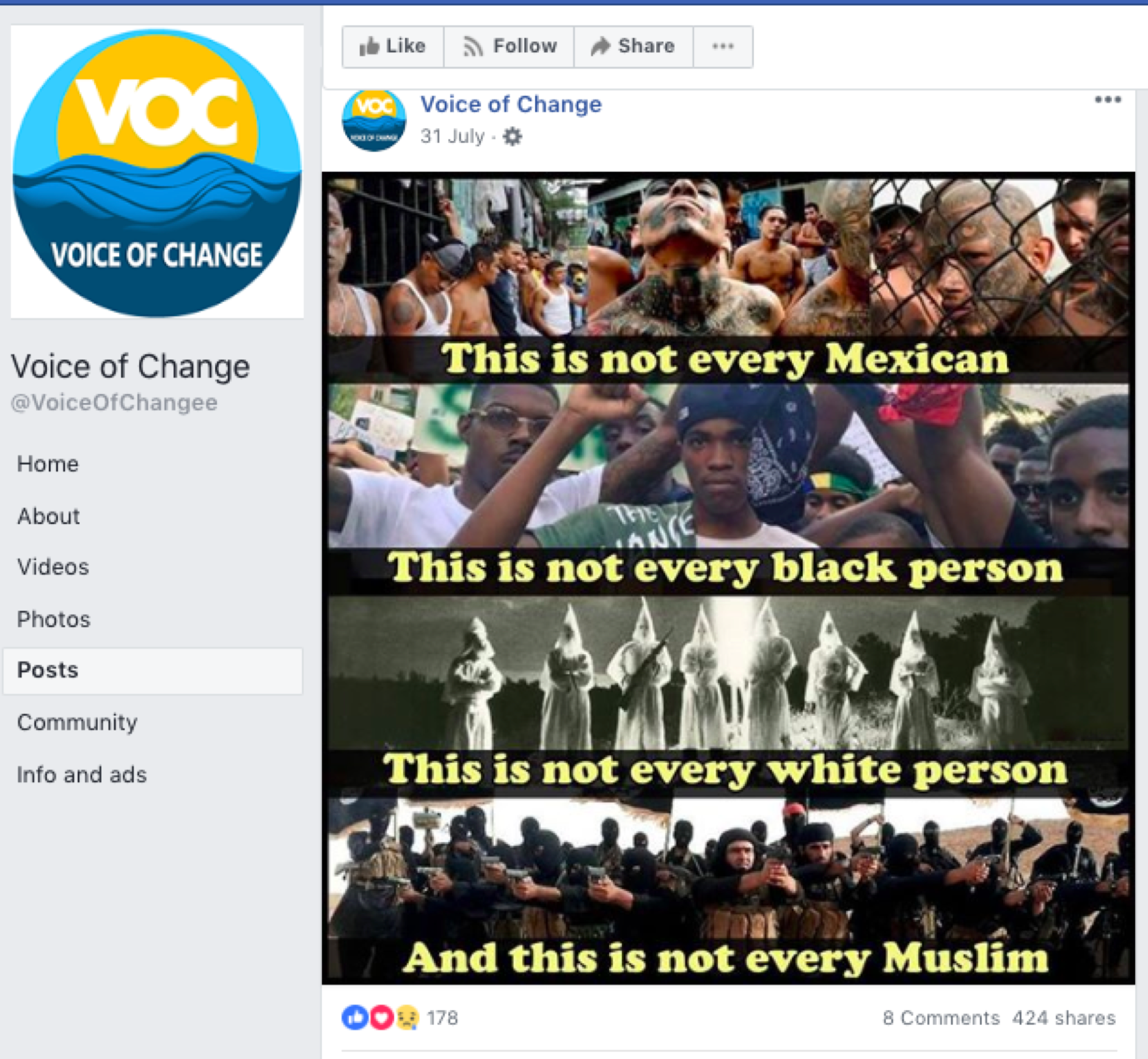 United States, 2018 —The Russian government hacked into the World Anti-Doping Agency (WADA), and exposed private information in an attempt to discredit both the WADA and American athletes. In a cyber-enabled influence operation, the leaked information was amplified by the Russian government and Kremlin-associated media to push a narrative emphasizing American hypocrisy and the deceits of the WADA. 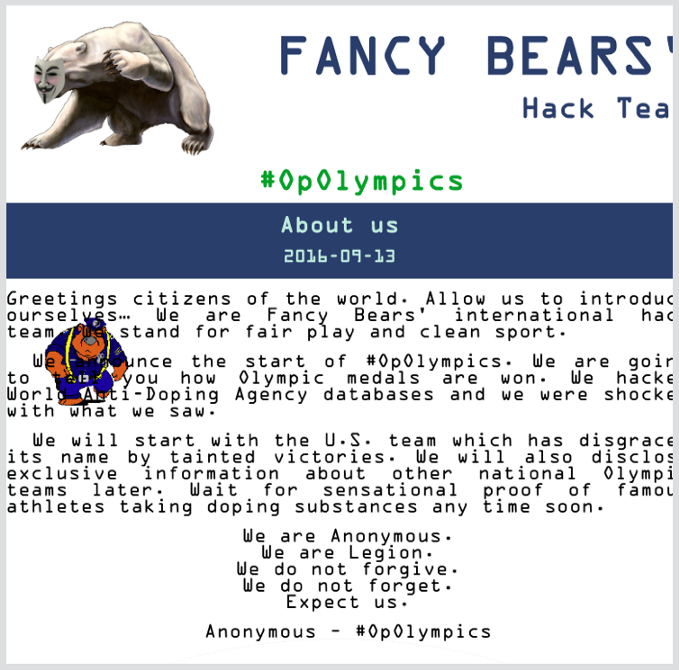 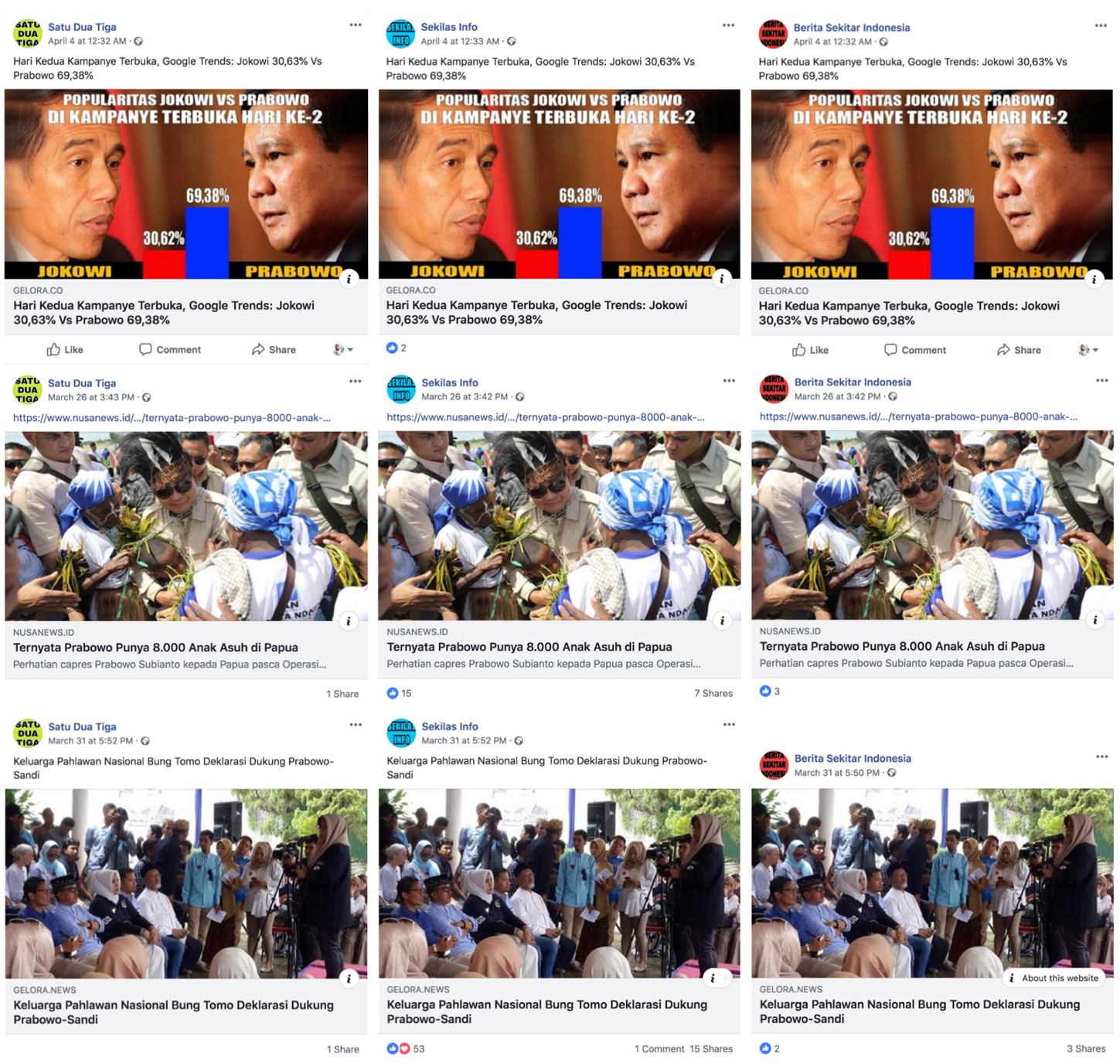 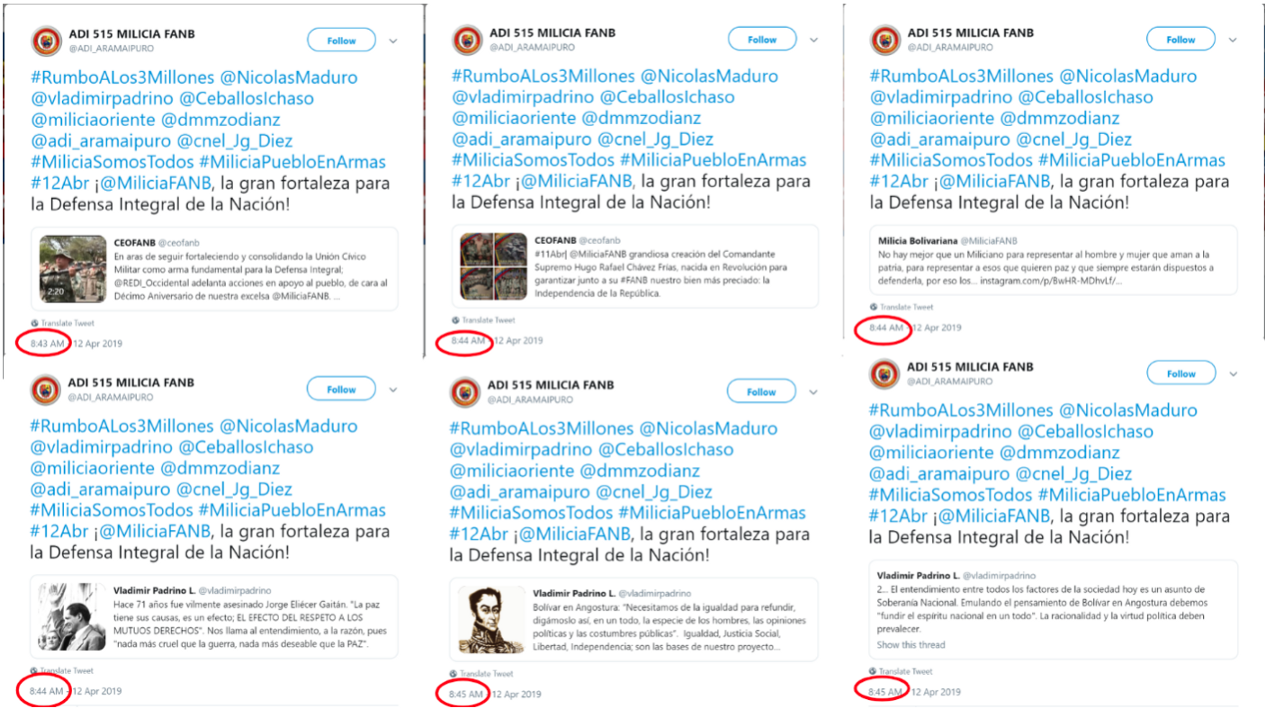 Georgia, 2018 —A network of inauthentic pages, disguised as news organizations, political parties, public figures, activist groups, and media entities, spread divisive socio-political content that promoted the majority government in Georgia while discrediting rivals. The network was linked to Georgian majority government party the Georgia Dream Party, as well as to an advertising agency in Georgia. 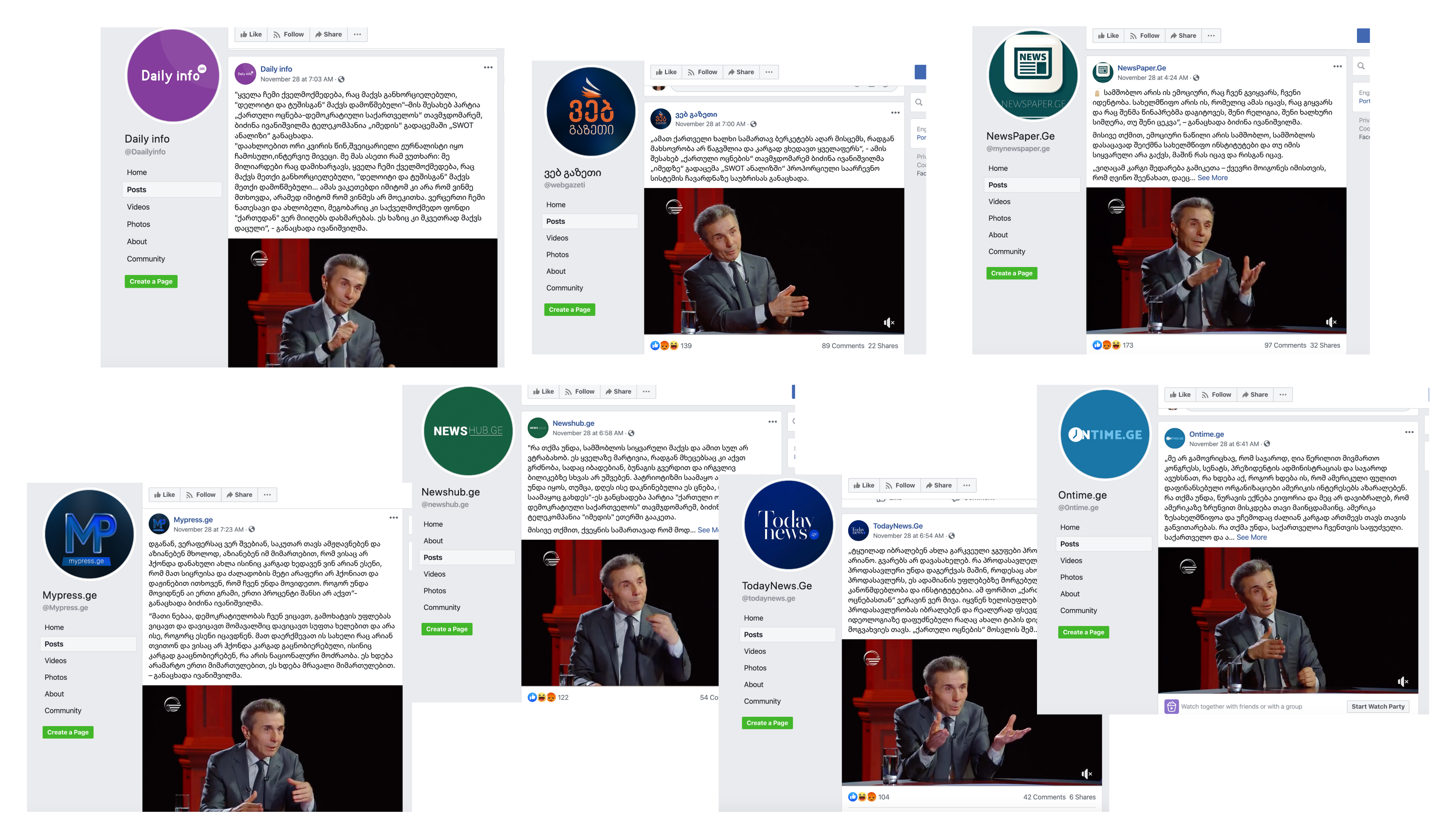 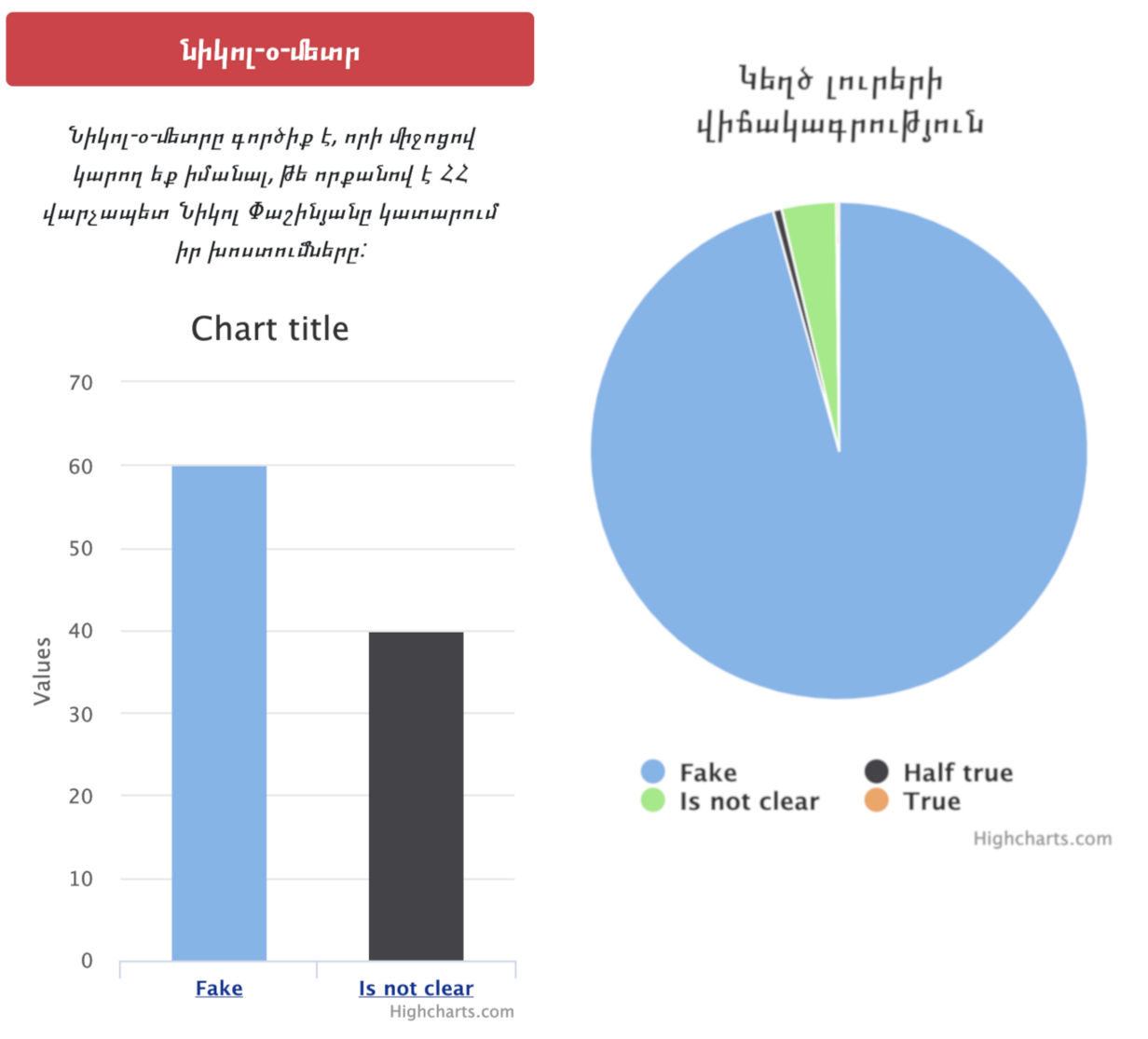 Italy, 2014 —Civilian and corporate Twitter accounts were registered for a service hosted on Italian politician Matteo Salvini's personal website which allowed the accounts to partially be used as bots in a larger network. The dormant network was activated in the time leading up to Italy's March 2018 federal election.

United States, 2017 —A hashtag decrying Morgan Freeman (after he warned that Russia was waging an information war in the United States) was perpetuated by a group associated with Russia's Internet Research Agency. RT spread the hashtag and related media, and it was then amplified on several other platforms. 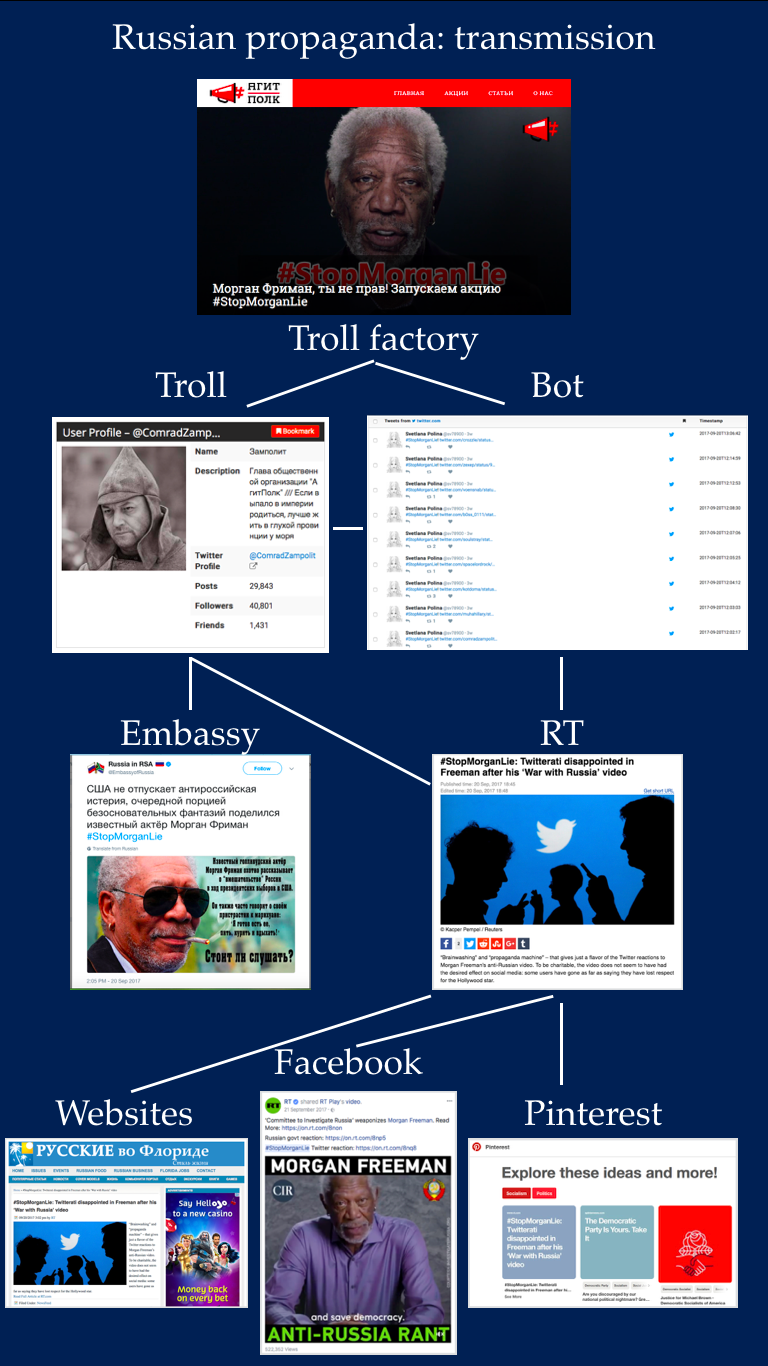 Mexico, 2018 —Inauthentic activity originating from South Asian Facebook accounts artificially inflated the number of Facebook “likes” on social media content for and about the state government of Oaxaca in Mexico. The main beneficiary of the activity was Alejandro Murat Hinojosa, the governor of the state of Oaxaca. 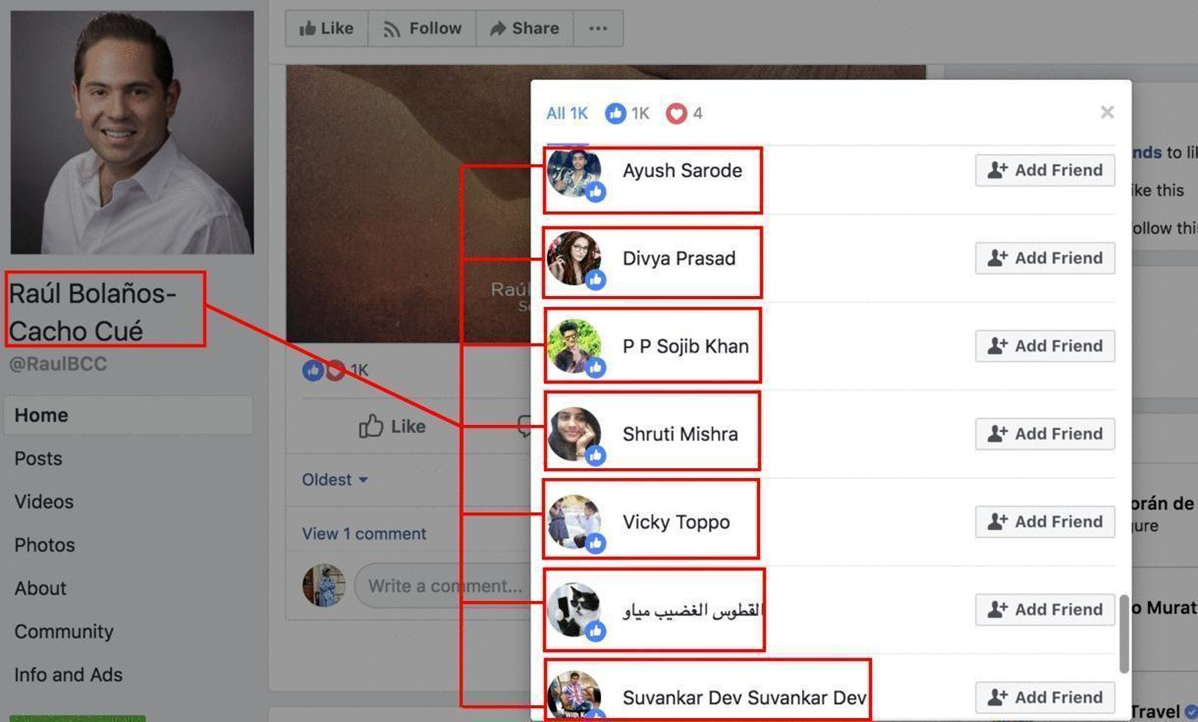 Baltic States, 2010 —Around 300 Facebook pages masqueraded as groups with special interests — ranging from food to support for authoritarian presidents — and amplified content from the Kremlin’s media agency, Rossiya Segodnya. It appears to be a systematic and covert attempt to build Rossiya Segodnya's online audience in over a dozen countries. Sputnik, an outlet in Rossiya Segodnya's portfolio, was particularly boosted in this campaign. 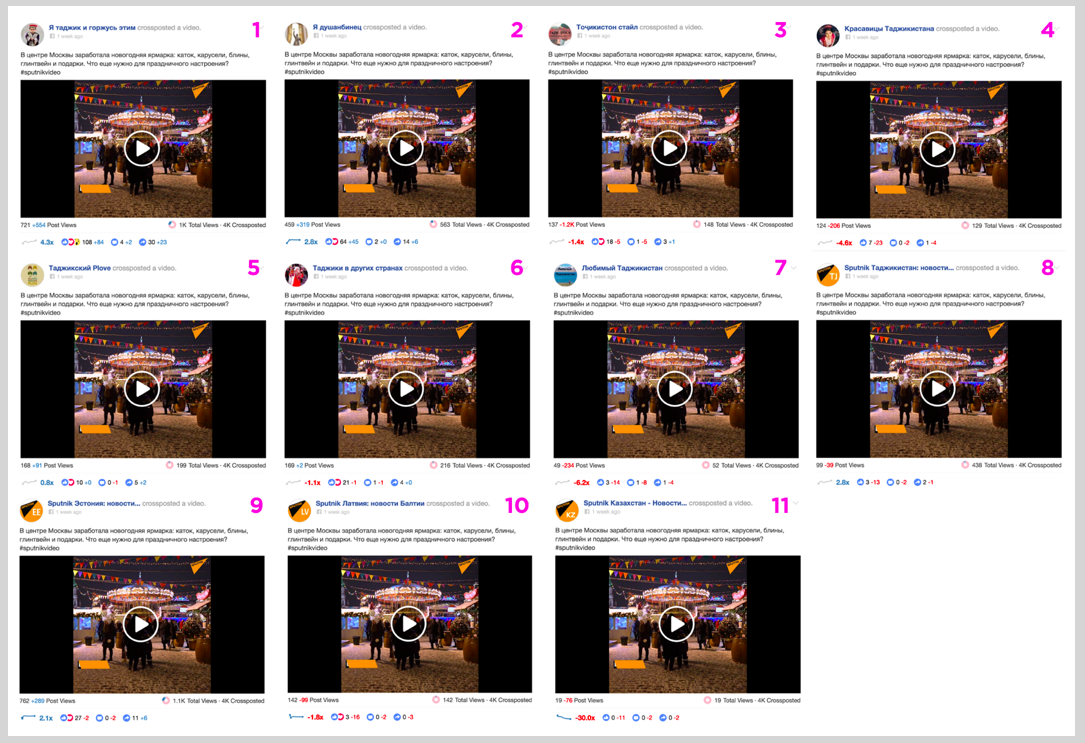 United States —A campaign attributed to the Internet Research Agency or “troll factory” in Russia ran over 100 accounts on Instagram and Facebook. According to traces of this activity left online, the campaign posted divisive content from all political angles, right up to the eve of the U.S. midterm elections. 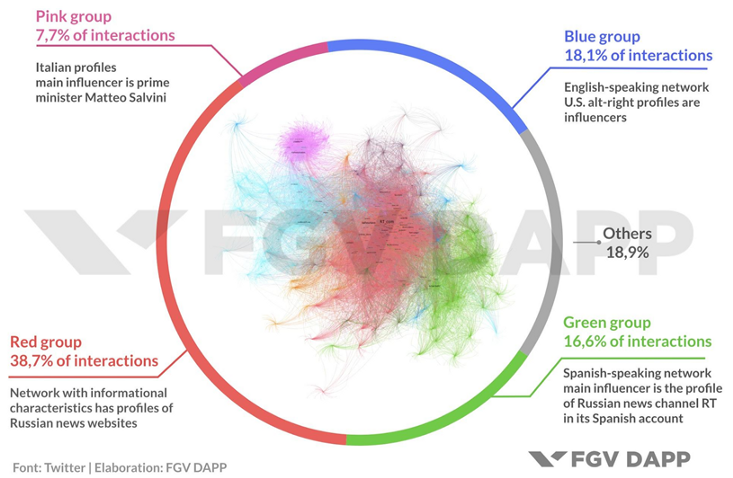 France, 2018 —A network of coordinated and inauthentic Facebook and Instagram accounts impersonated French-speaking users. The network's posts ranged from soccer and fashion tips for Muslim women to attacks on French President Emmanuel Macron. 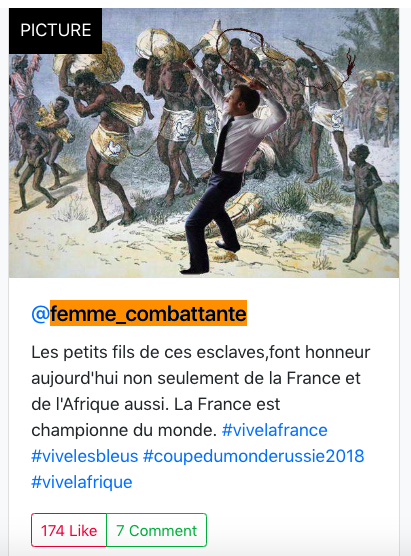 Lithuania, 2018 —An established Lithuanian news media outlet was hacked and a fake article depicting an alleged invasion plan of the Baltic states by NATO forces was published on the site 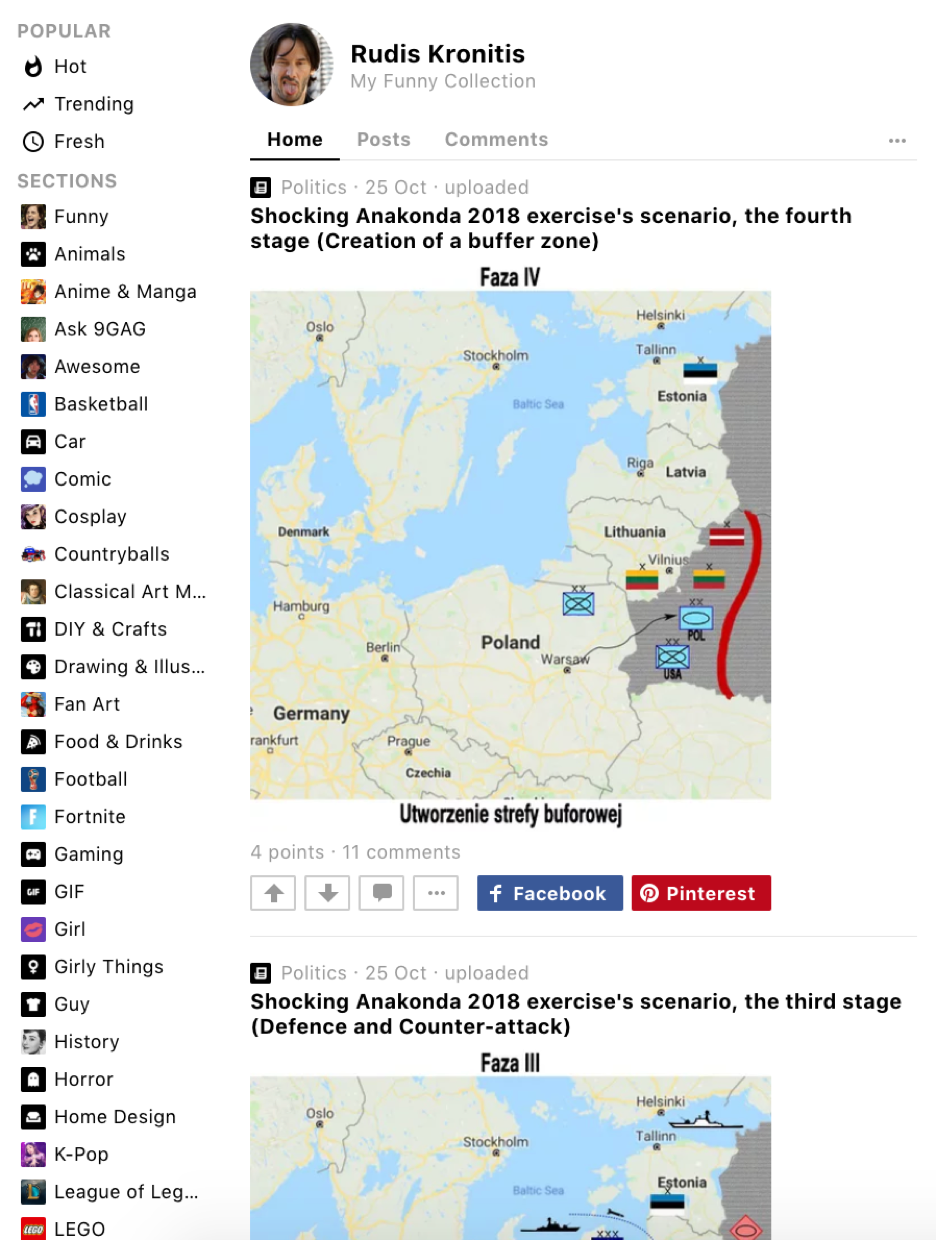 Indonesia, 2019 —Spam accounts manipulated Twitter campaigns and hashtags in favor of the incumbent President of Indonesia, Joko Widodo. Accounts coordinated to get hashtags to trend inauthentically. 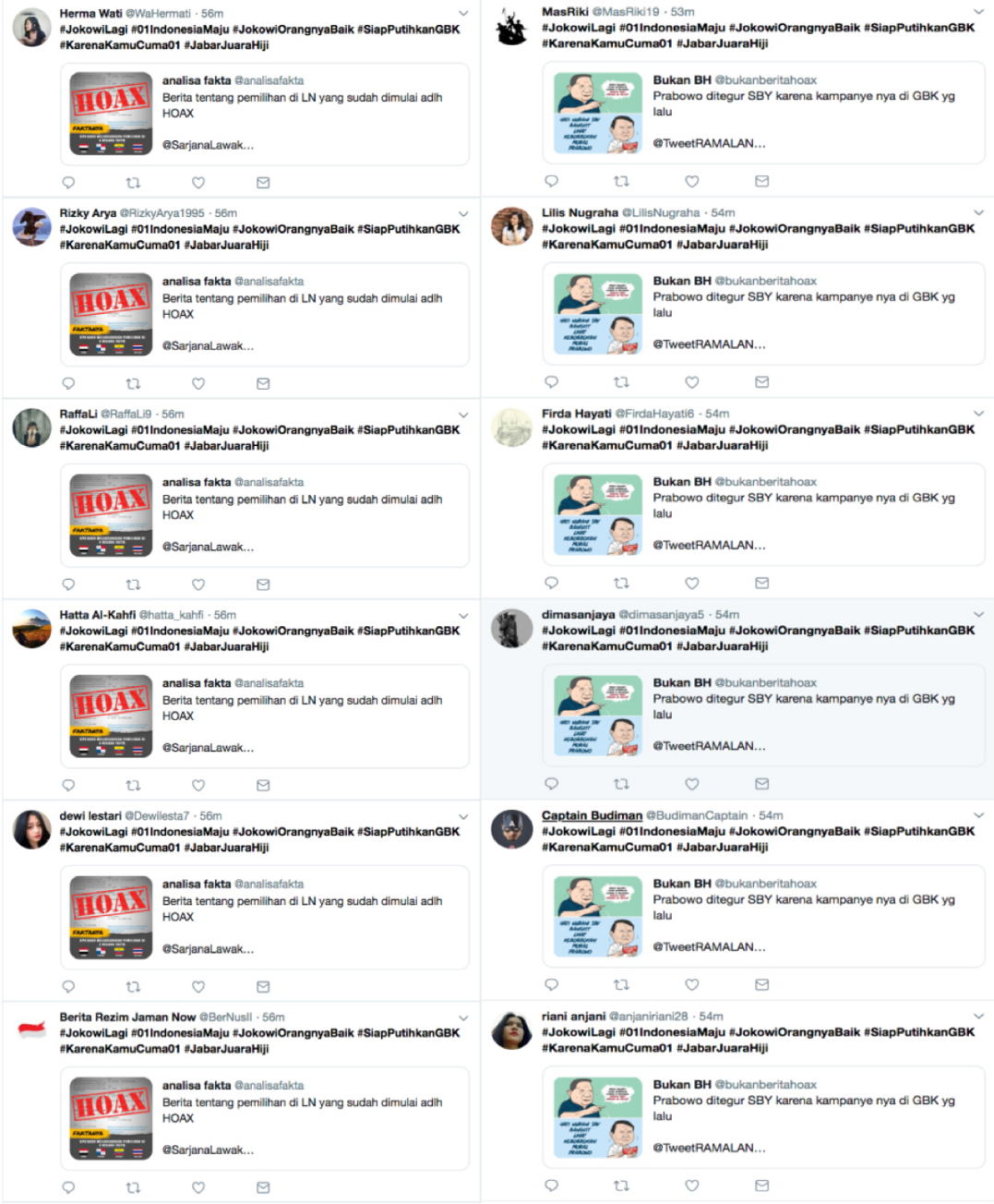 West Africa, 2017 —Israeli political marketing firm the Archimedes Group targeted audiences around the world with inauthentic Facebook assets to influence elections and establish local audiences. The commercial network targeted at least 13 countries; their assets were followed by over 2.8 million users. 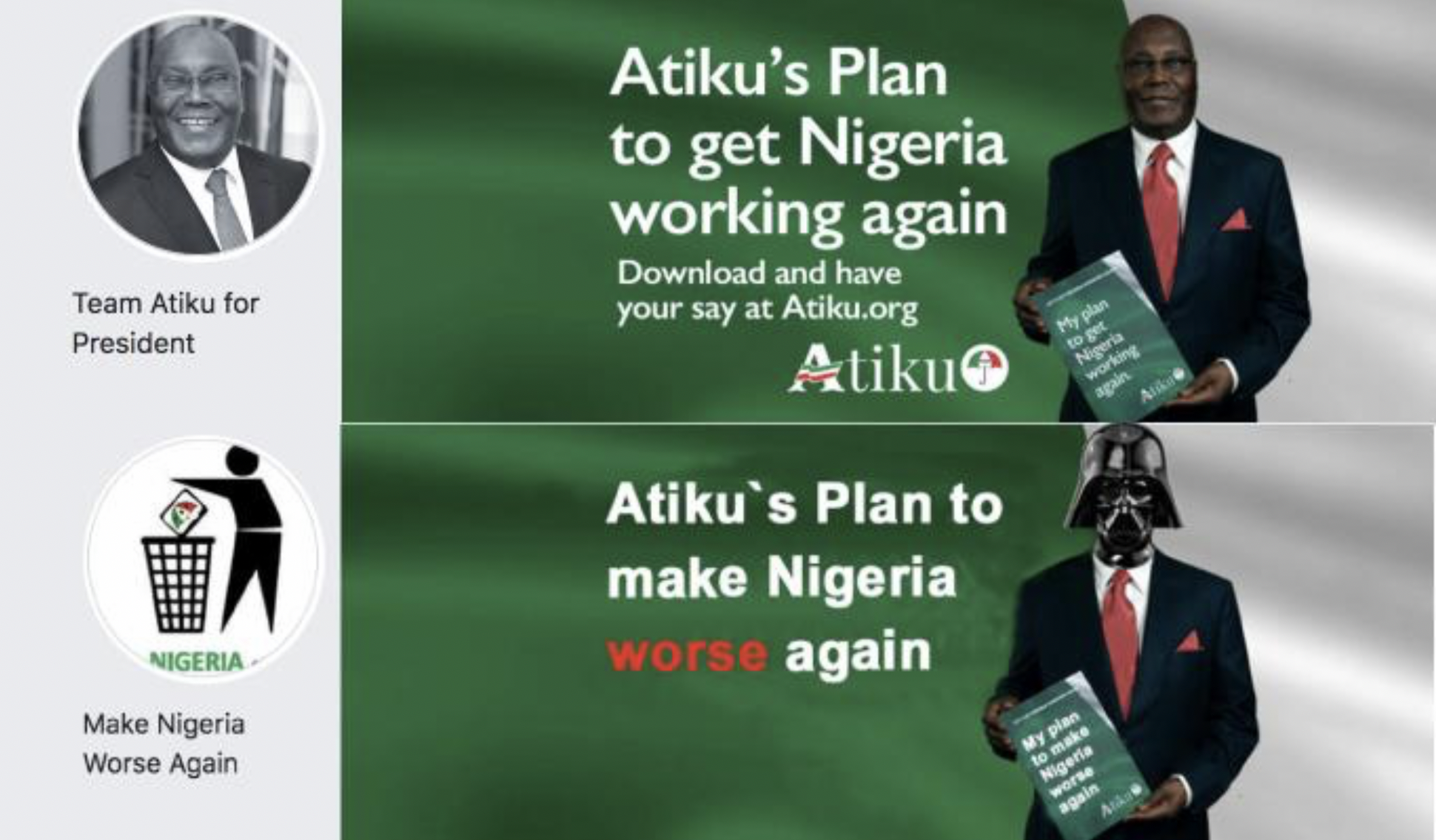 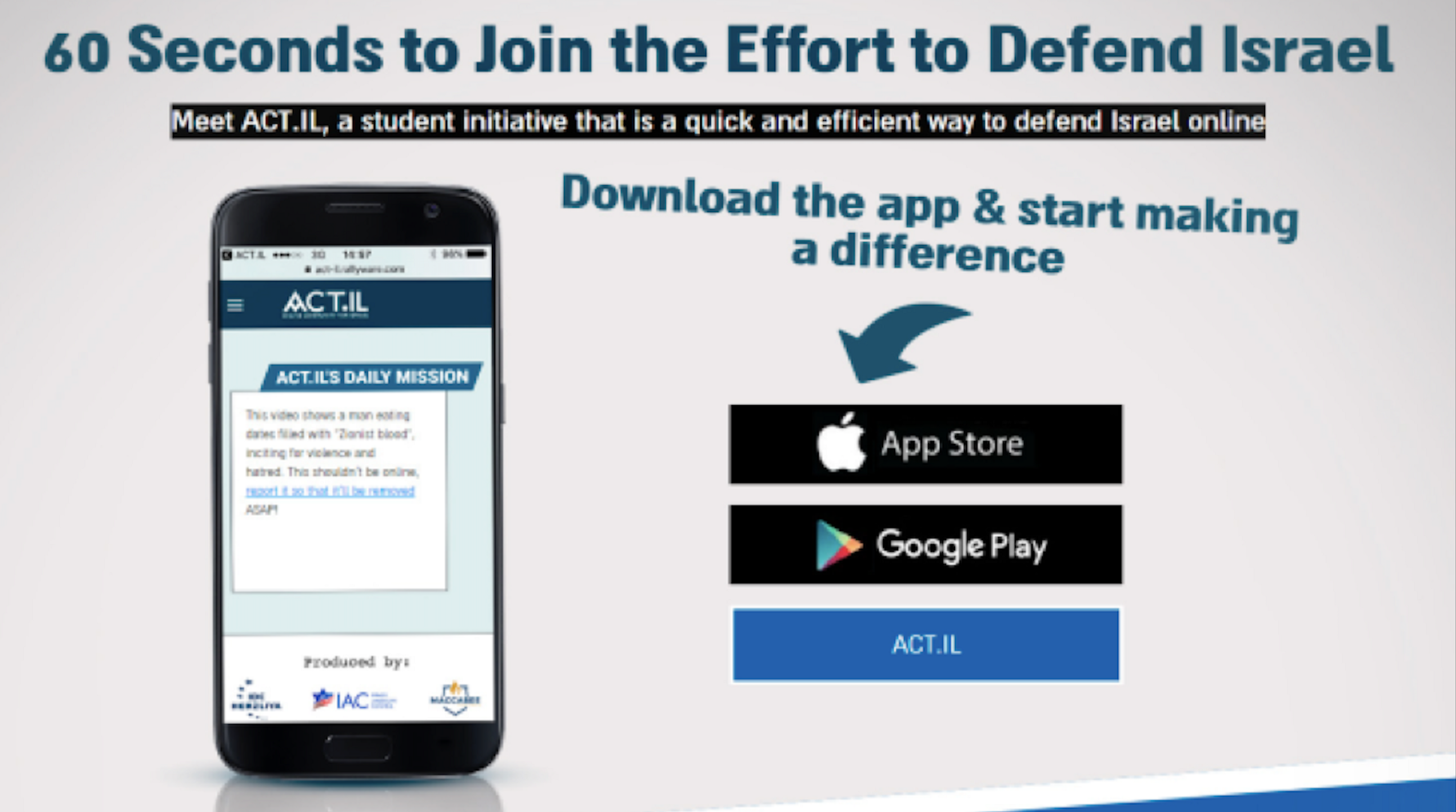 Lithuania, 2018 —A fake translation of a video depicting Lithuania’s Minister of Defense Raimundas Karoblis was intended to cause a rift between Lithuania and Ukraine. 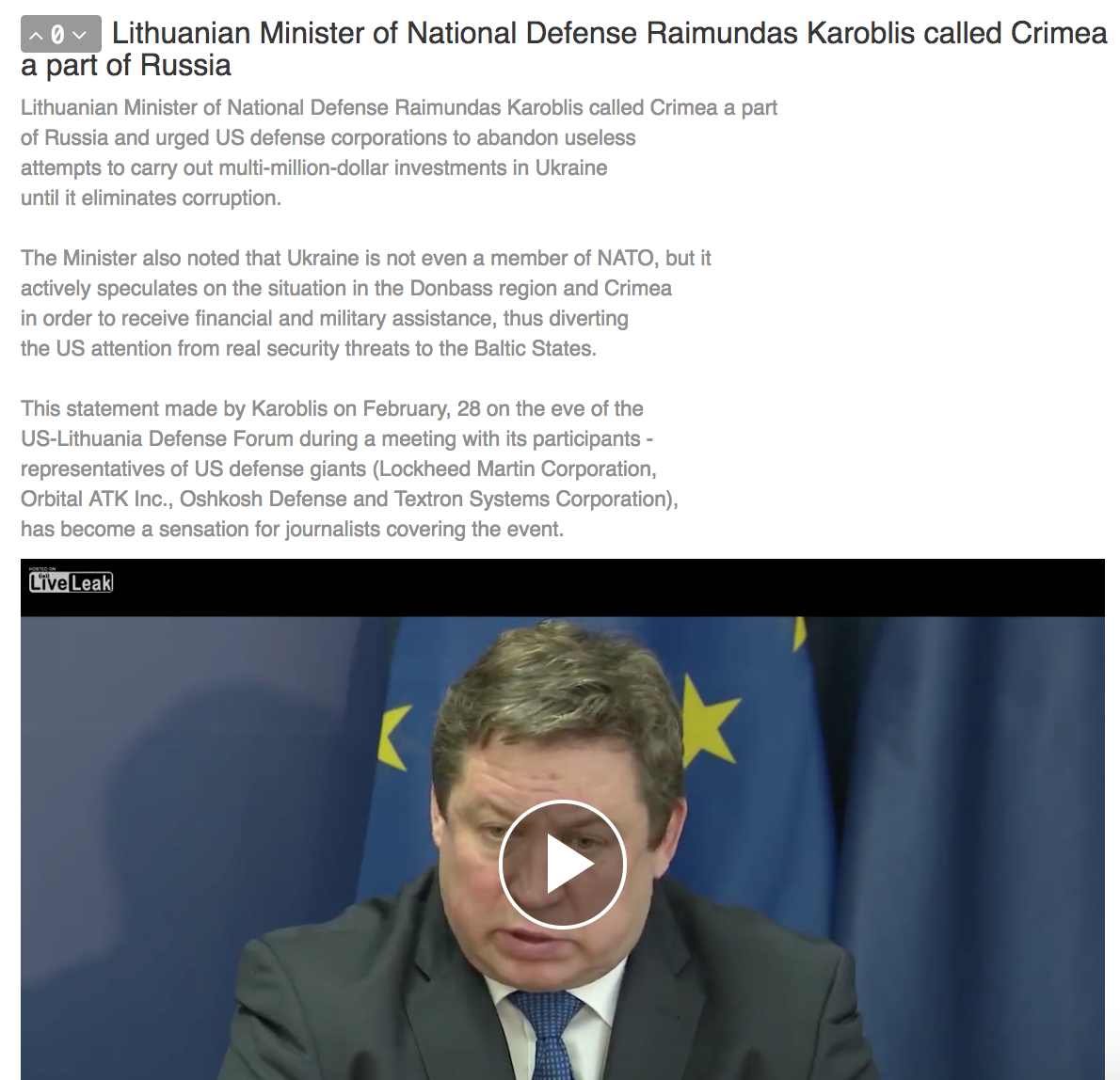 Middle East, 2015 —Two digital marketing companies published divisive socio-political content in the Middle East. Facebook removed many of their assets in August 2019, some of which had been active since 2015.

United States —A network of websites and social media pages in both English and Spanish language was traced back to Iran. The advanced distribution network published pro-Iranian content and messaging that was friendly to Iranian international and regional interests. 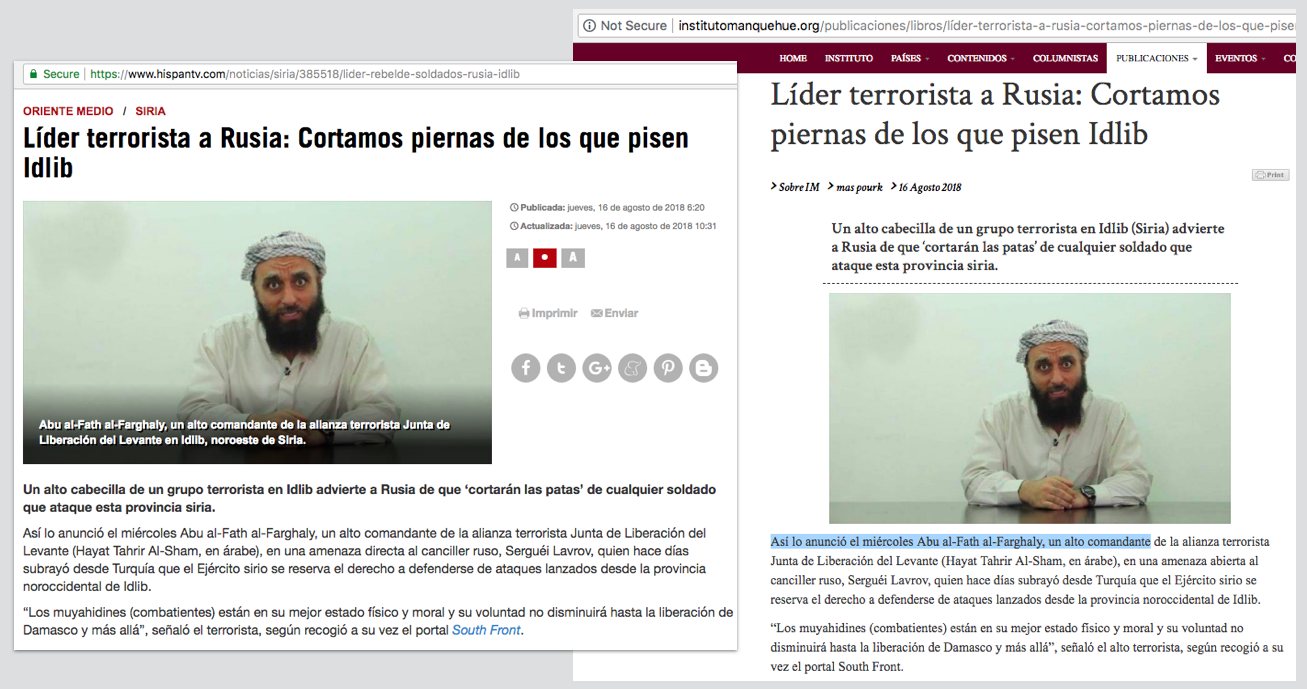 Hong Kong, 2019 —In order to obstruct discourse about the Hong Kong protests and sow discord, a network consisting of approximately 200,000 accounts took aim at pro-democracy protesters in Hong Kong via commerical spam and political tweets. 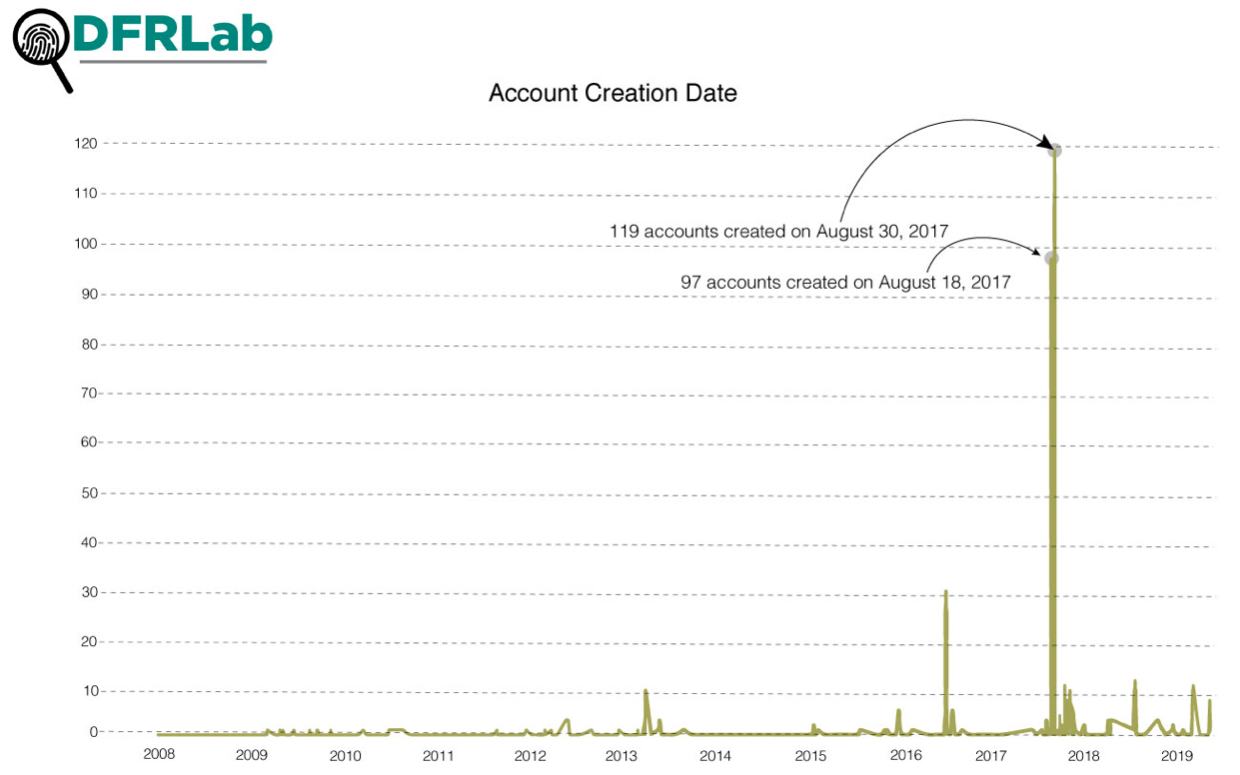 Netherlands, 2018 —Provocations by Dutch alt-right figures who solicited cartoons depicting the Prophet Mohammad were met with an inauthentic response as bot-like behavior on twitter suggests an artificially amplified backlash.

Spain, 2018 —The Catalan independence movement was artificially amplified through the use 130+ Twitter accounts.

Colombia, 2019 —A group of accounts that exhibited bot-like behavior amplified three pro-government hashtags in Colombia between May and July 2019. 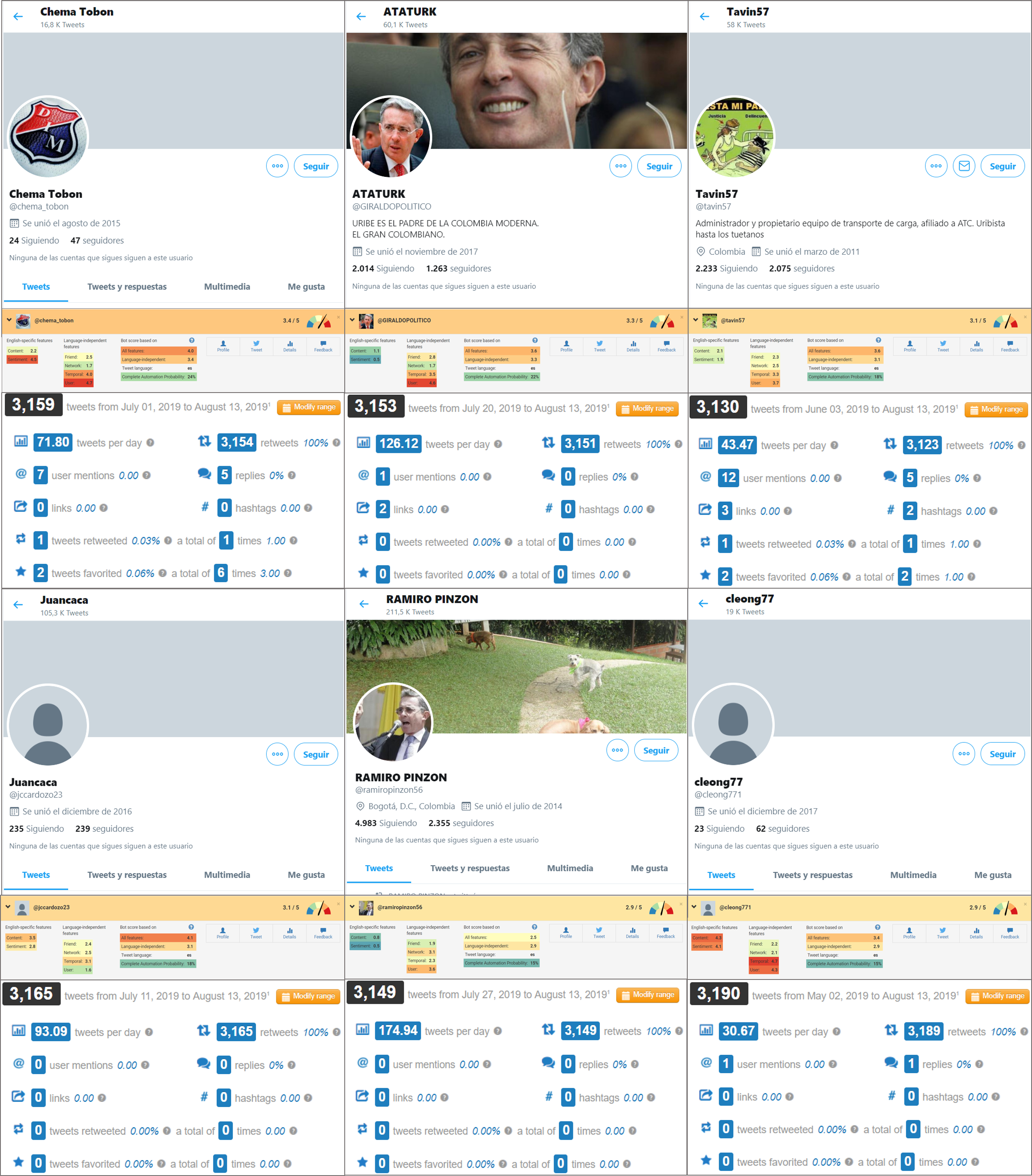 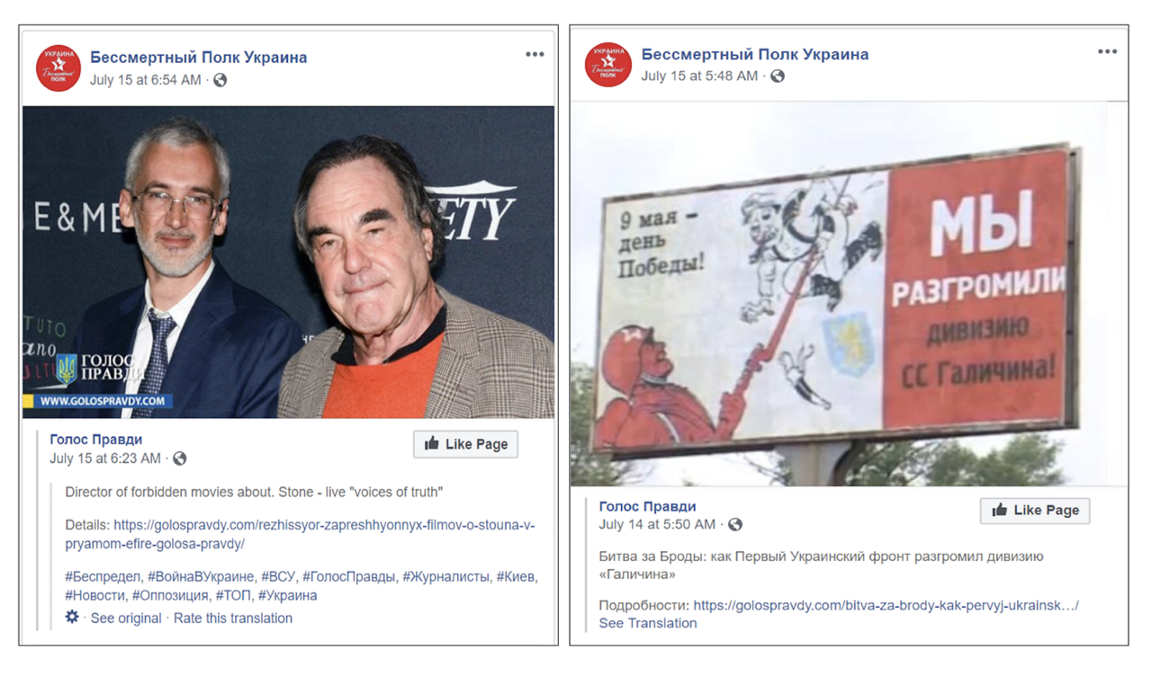 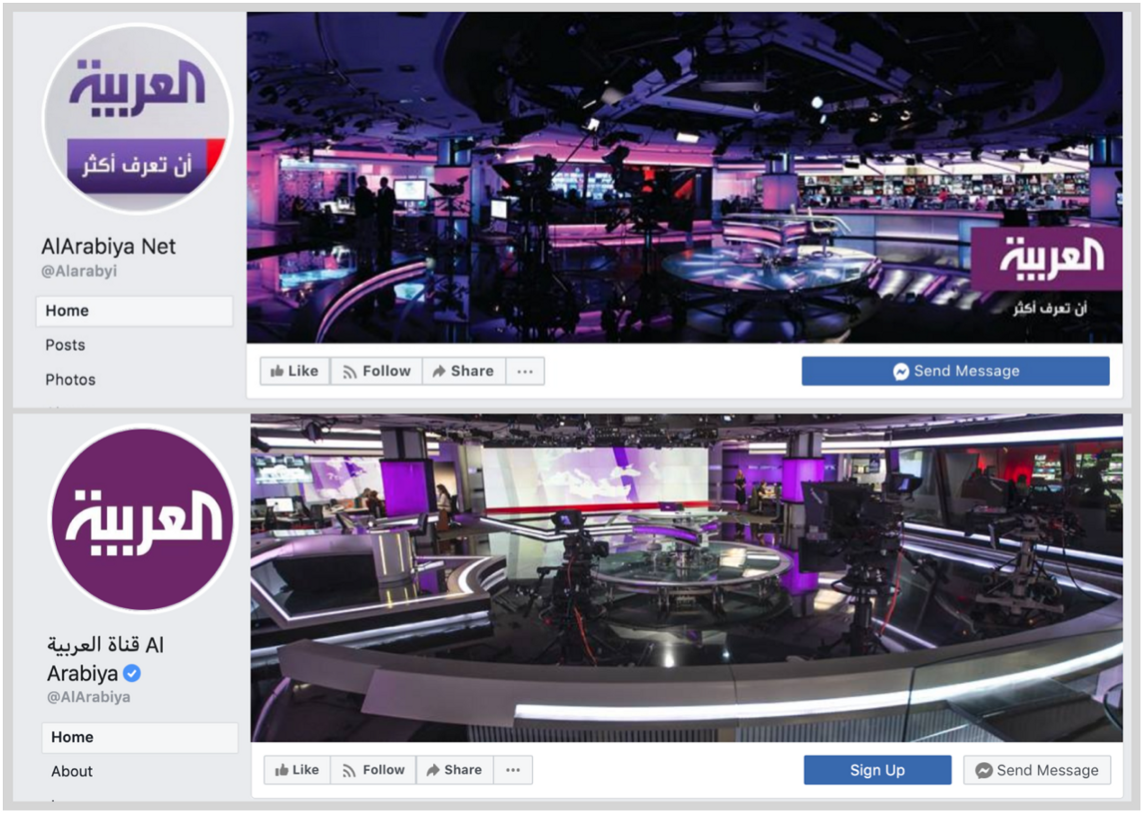 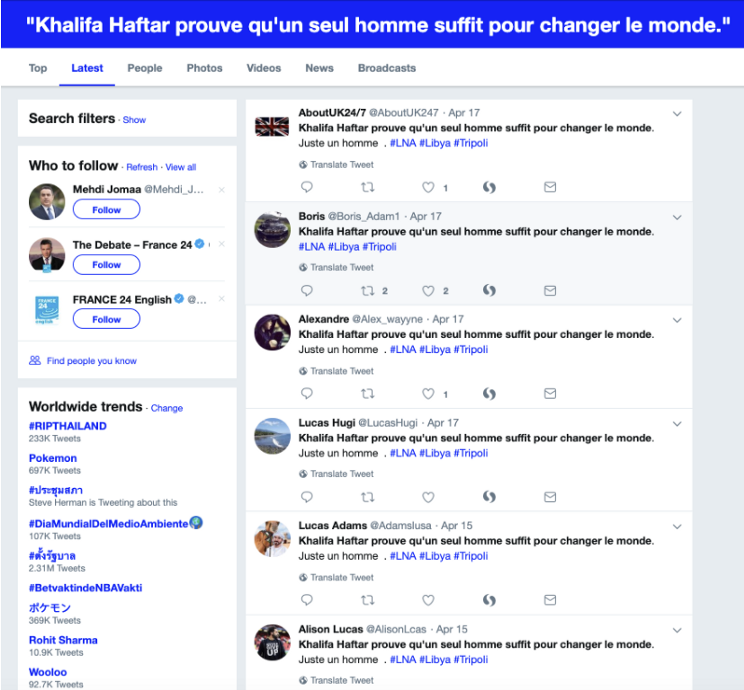 Italy, 2018 —Ahead of Italy's March 4, 2018 federal election, fake documents involving candidates were disseminated less than 48 hours before the vote, during a period of media silence as stipulated by Italian election law.